Disclaimer: This post contains many crappy, infantile references to poo, or "do-do" if you will. What is it with guys and tongue-in-cheek poo talk anyway?
The Venue 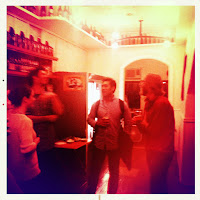 First of, a huge thanks to Beer Street for hosting this tasting event.

Beer Street played host to Jeppe (wait..gotta go look up the full name) Jeppe...Jarnit...Bjerso...got it! and an Evil Twin Brewing tasting event at their Brooklyn bottle shop on Monday, May 21st. The event was well attended with approximately 25 - 30 thirsty patrons. For a $25 admission charge we got Jeppe,  repeat sampling, and a 32 oz. growler of the Evil Twin beer of your choice.

Beer Street has come a long way since I first helped serve beer there at a pre-grand opening party back in November 2011. It is a quaint shop that is not small on the quality and uniqueness of the products it offers. The founder, Lorcan Precious, seems to go out of his way to stock the shelves with brands and styles you won't find in your local neighborhood liquor store.

Beer Street offers samples from the 10 taps and a variety of growler sizes depending on how thirsty you expect to be in the next few days after your visit.

The Evil Twin Beers on Tap

Jeppe also brought along and talked a bit about other Evil Twin brews available in bottles. They included Russian Roulette, Yin and Yang, Disco Beer, and Biscotti Break.

Yep on Jeppe and Evil Twin
Jeppe gave a very entertaining (but not too detailed) background of himself and the beers he brought along for tasting. He thinks he has about 10 beer projects underway across the US and back in Denmark. He is quite unconventional in his approach to craft beer.

He prefers to start off with an end product in mind. From that he creates a recipe...that he soon forgets. By his own admission, don't ever ask him to tell you what hops he used. Jeppe gets it brewing and he's off finding uncanny inspiration for concocting the next beer. Sometimes he will collaborate on a label before deciding what style of beer will occupy the space inside the bottle (eg. Russian Roulette).

Overall, the sense was that Jeppe's talk and presentation was just the right length and the right amount of detail. No question it had a distinct entertainment value. I eavesdropped on a few comments to that effect. It was a very cool and laid back crowd that mostly stuck around for 2 hours or so after Jeppe's presentation.

My impression is that all of the Evil Twin beers being employed to slake the thirst of the attendees were all very well received. I did not have one that I did not like but, for me, the depth and smoothness of the vanilla (without being overly sweet) in the Soft Dookie won me over.


"Yes, I admit it. I am not above drinking dookie water."

The Drop on the Dookie
As Jeppe explains it, he was changing the diaper of his son and it had the sweet scent of vanilla. That's the thing about Danes, they are always finding the positive in the "shittiest" of situations. Denmark consistently ranks at the top of the Happiest Country list. I should know. I worked for a Danish company for a while and had 8 trips to Copenhagen during that time. They love being happy and drinking beer. I do love the Danes...but enough about me.

While he was trying to sell us on the idea of baby poo smelling like vanilla I was thinking,


"Ummm, that was not my experience with my twin boys. Maybe some serious brett-butt funk, but vanilla? Really? Whatever."

The beer was originally called "Soft Poo" but Jeppe came around to the thought that that might be a bit too literal, thus "Soft Dookie" was born.

In Denmark, there are no regulations around having child-like fun with naming your beer. To sell it in the states, he was required to "drop" the dookie or the beer goes in the crapper with the dookie. That is how we get "Soft DK." I do not know how well Soft DK would sell in Denmark (DK) though?

Melvin and Ron and Ryan were still hanging out when I left about 11 PM. Go meet them at Beer Street. As for the dookie, leave the moist wipes at home. This is one dookie you will want to clean up with your mouth. I wonder if I went too far with that one?
Posted by Craft Beer Coach at 2:02 PM